As a pianist who was formally trained in both in classical music and jazz, I often collaborate with other musicians who specialize in a great variety of musical genres, bringing in my own musical experience to create something unique and beautiful.  One of my favorite radio DJ's in Austin, DJ-RJ (KAZI 88.7 FM), and I collaborated to compose, record, and produce this fantastic piece of dub.

I hope you enjoy this instrumental reggae, spacey, jazzy, tune you may one day hear as the ending credits of a summer blockbuster begin to roll.  "Checkers Champion" is named in honor of keyboardist/composer Austin Kimble's grandfather, James S. Spencer, who, many years ago, was a State Champion in Missouri in the game of... you guessed it: Checkers!

Purchase the full album at https://itunes.apple.com/us/album/space-age-riddim/id878168746

tags: curriculum, education, beginner, be
Posted by Unknown at 10:43 AM 3 comments:

Last October I released a two-disc album of original music with my project, The Kimbles, featuring members of the Austin Kimble Quartet, an Austin, Texas-based jazz band.  Today, I'm sharing one of my favorite jazz compositions for you to listen to anytime you visit my blog.
"3 cheers for free music!"

Yes, it is named after and in honor of the spiritual guru, and I composed it myself.  In fact, all of the music on Meet The Kimbles is original except for one track; we covered the jazz standard "After You've Gone."  Babaji is inspired by the music of Texas-trumpeter Kenny Dorham (1924-1972) and pianist Horace Silver (1928 - June 18, 2014) and is released on my blog in honor of Mr. Horace Silver, may he rest in peace.

I would be honored if you purchased a physical copy of our album at MeetTheKimbles.com  (It's also available everywhere music is sold online except iTunes :-)  If you've been following this blog, you won't be surprised to hear that the first disc is original rock music, and disc two is original jazz music!  I would like to thank jazz greats like Miles Davis and Herbie Hancock for the inspiration to use both genres of music on one album release... albeit with a different method to the madness!

For you audiophiles out there, if you purchase a physical copy of our CD, you also get lossless FLAC and high-quality MP3 downloads of every song for free with your purchase.  No more sub-standard iTunes sound quality!

Posted by Unknown at 3:44 PM No comments:

Requested by a student, below is a transcription for solo piano of Kashiwa Daisuke's recording of "Coto," presumably named after the Japanese instrument.  [Also, see a transcription of Daisuke's take on the jazz standard "My Favorite Things"  at http://www.jazzpianouniverse.com/2014/08/transcription-my-favorite-things.html/ ]

I almost knew I would be posting another not-quite-jazz transcription for piano given that it is:
1. reminiscent of much of the music I lovingly recall from my month touring the Asian continent back in 2011,
2. from the same album as a previous transcription I posted
3. aurally similar to something you might find on a Studio Ghibli movie soundtrack -- movies I've been re-watching with my wife this summer.

Kashiwa Daisuke was born in Hiroshima and started his music career in 2001 composing and playing guitar in the Japanese post-rock band Yodaka.  The sheet music below is playable by intermediate through advanced pianists + you don't have to be a jazz player!
Scroll down for a full transcription of Kashiwa Daisuke's solo piano recording from the album 88, to which you can listen via YouTube: 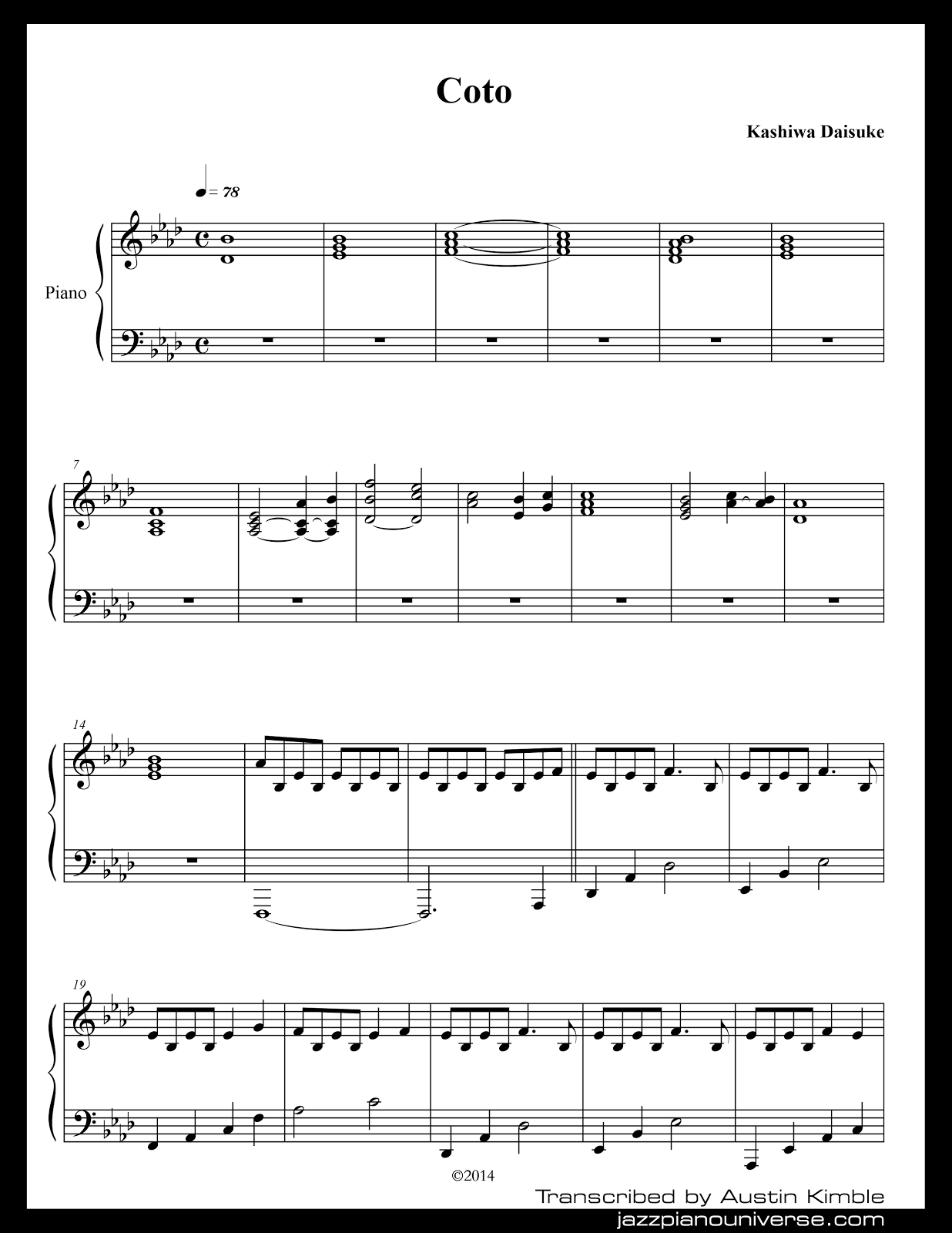 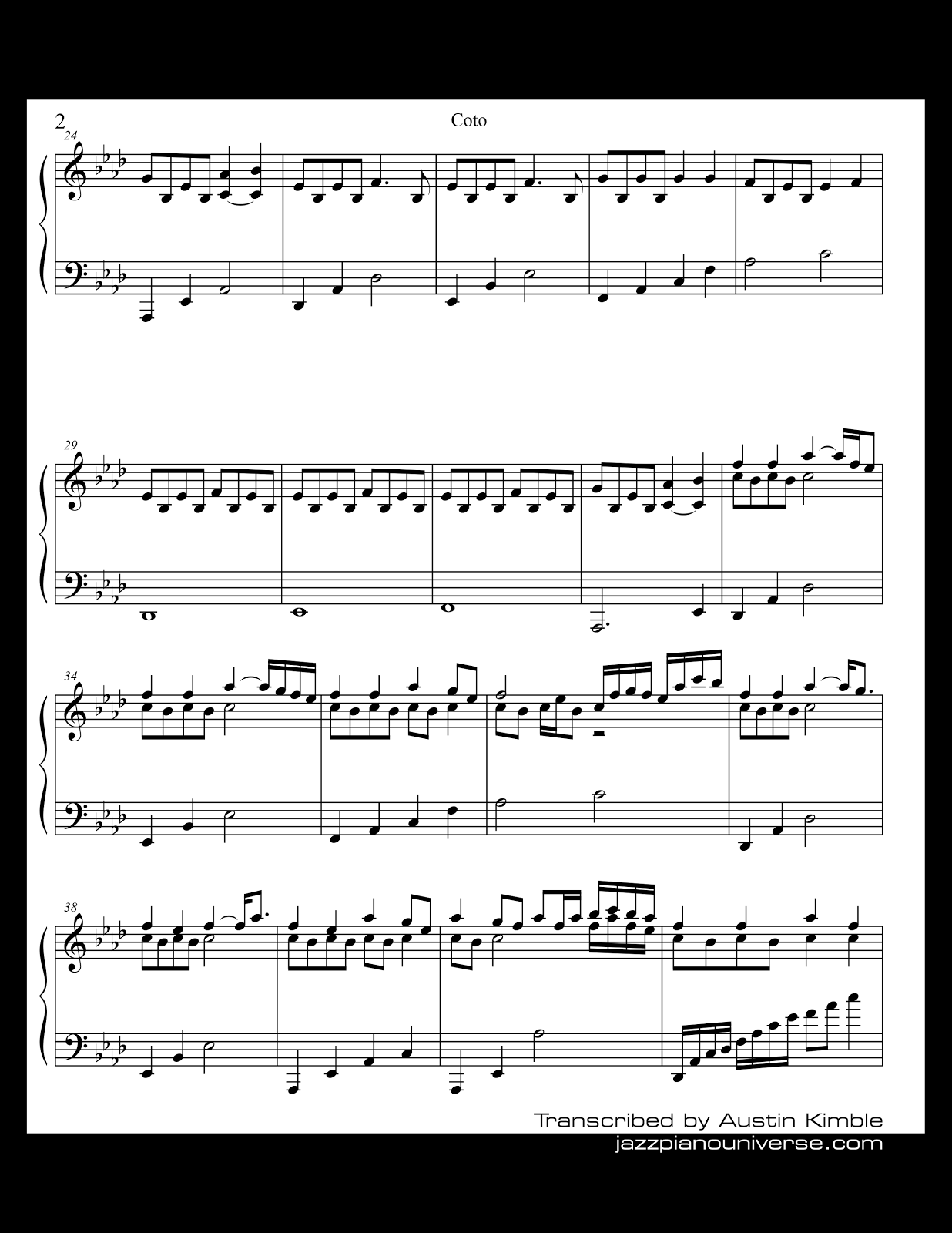 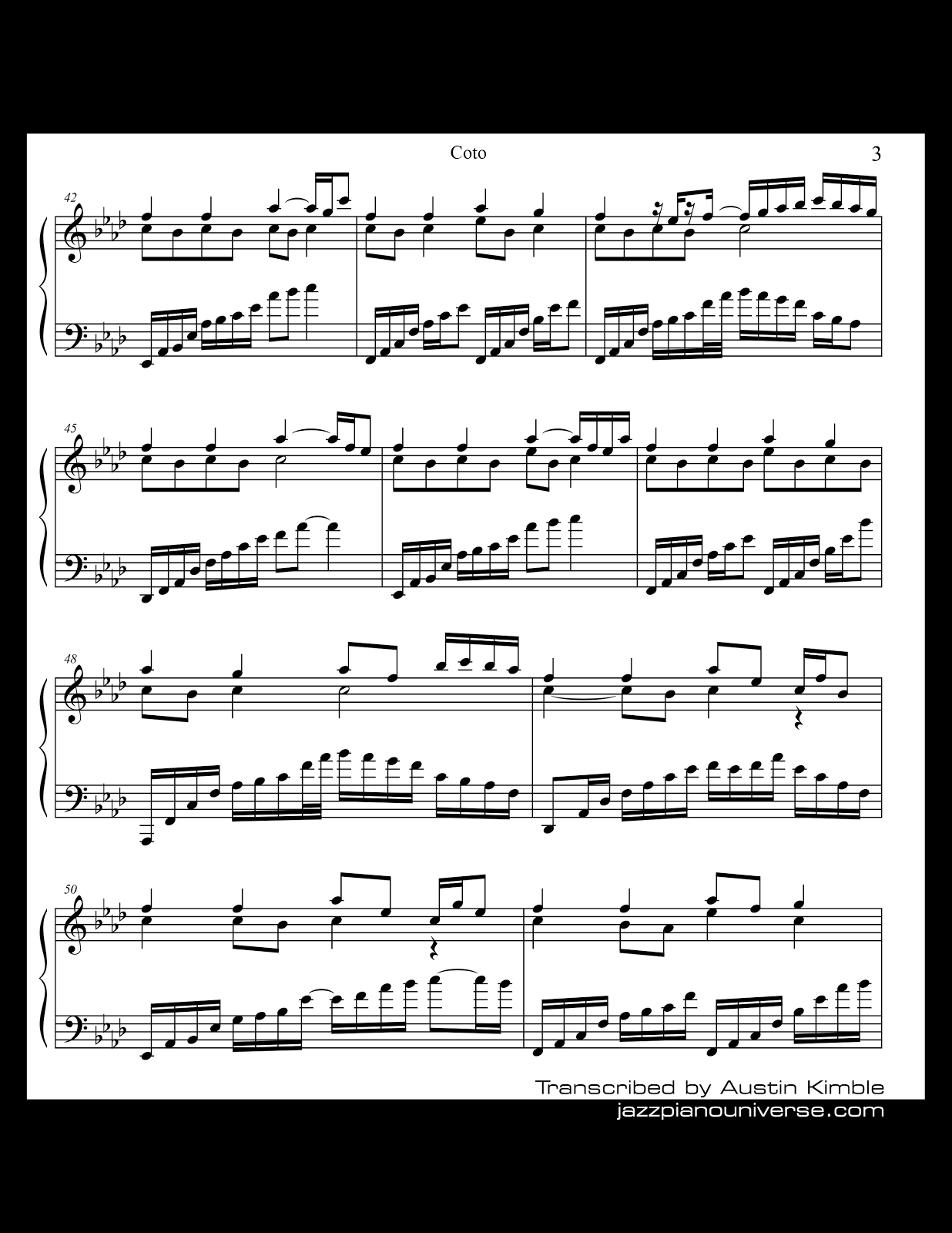 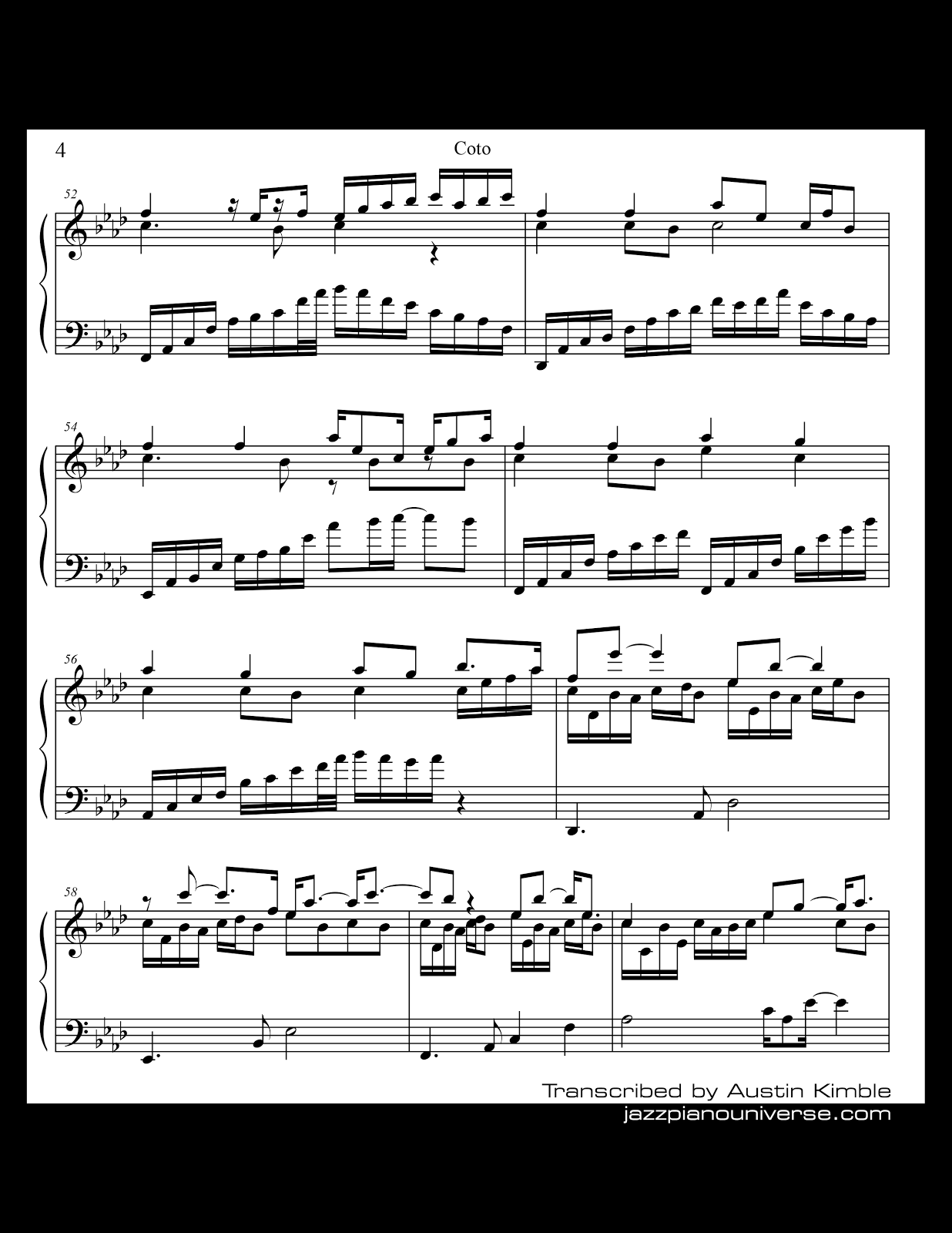 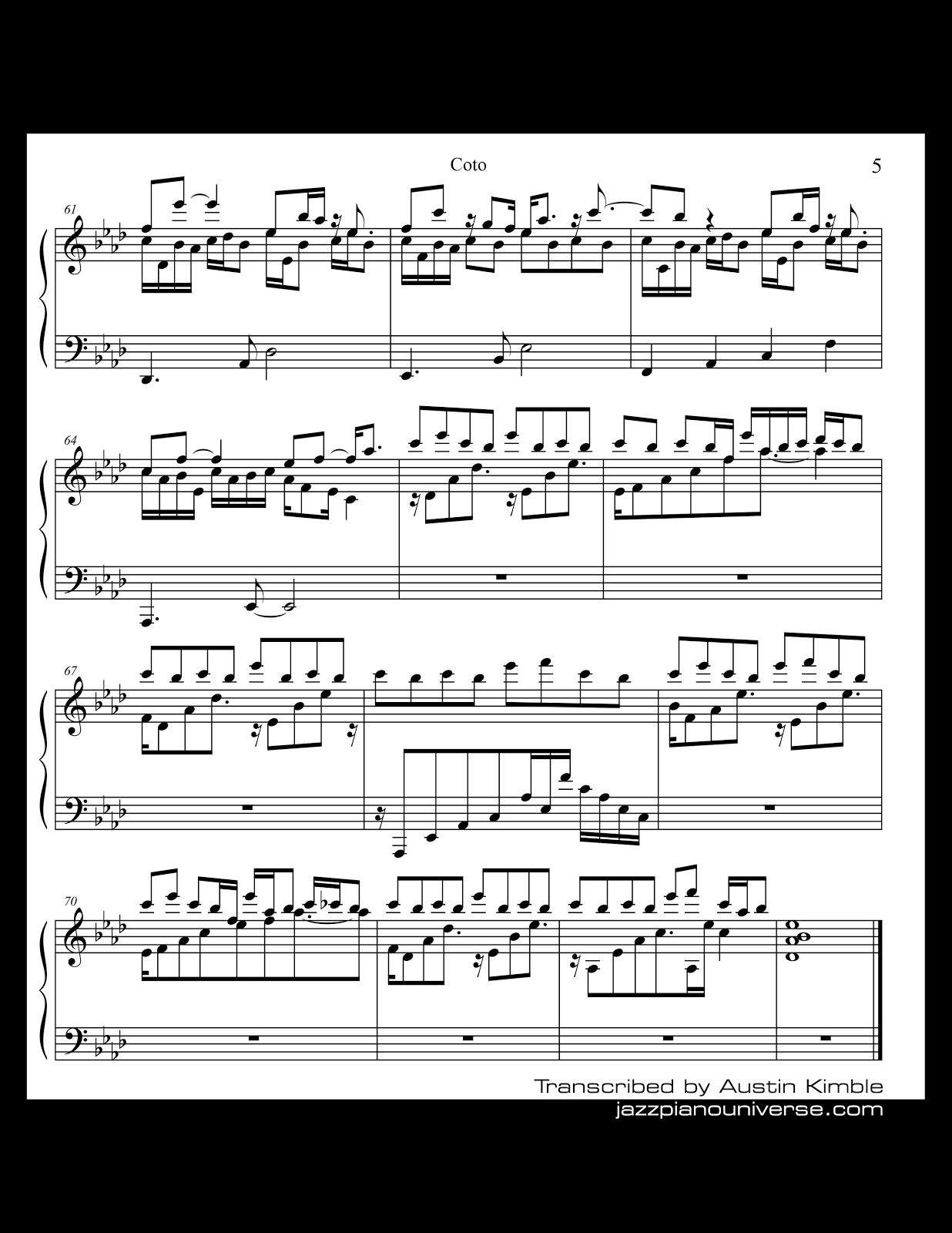 Top 5 Jazz Trumpeters of All Time

The music of five jazz trumpet masters (at the least) should be present in the listening library of anyone who appreciates good music!  Their jazz music is an auditory necessity for all aspiring jazz musicians, especially pianists.   One can learn multitudes by understanding everything about these musicians -- from their phrasing, melodies, and rhythm, to their musical "story-telling" techniques and their lifestyles.  The following list is of my top 5 favorite jazz trumpet players of all time.

Author's Note: Read more on the value of pianists listening to trumpeters here, and stay tuned for an article on my favorite jazz pianists coming soon!

Listen to Woody Shaw's composition "The Moontrane" while you read!

Woody Shaw (1944-1989) serves as a beautiful contrast to the remaining trumpet players on this top 5 list, largely due to being known for his "quartal" playing techniques (defined as music based on the use of fourths.)  He is one of the most underrated jazz musicians of all time. His compositions and improvised solos sound much different than most of the jazz music that came prior to him, due to most of the previous generation's chords and improvisational techniques being composed based on "tertian" harmony, or sounds based mainly on thirds.  McCoy Tyner (1938- ) is the quintessential jazz pianist example of a quartal player; he and Woody Shaw are both true pioneers of quartal jazz harmony, making their largest strides in the 1960's.

Clifford Brown (1930-1956) was a major pioneer of the hard-bop idiom, or sub-genre, of jazz.  He learned much of his characteristic style as a result of "sitting in" to play with Dizzy Gillespie (who deserves a spot on this top 5 list as much as anyone) as well as Fats Navarro and Charlie Parker.  He played faster, more flawlessly, and more beautifully than most other musicians of the time. It was this extraordinary virtuosity that had a significant influence on no less than two of the other trumpeters on this list: Lee Morgan and Freddie Hubbard.  It was a shame that he was killed at age 25 in a car accident, and thus we can only listen to recordings of his from the 1950's.  Today, his compositions, "Daahoud" and "Joy Spring" have become jazz standards.

Edward Lee Morgan (1938-1972) had more soul than any other jazz trumpeter of his era.  Freddie Hubbard once stated that he thought Lee Morgan had a certain "natural soul" whereas he himself had to work really hard at it.  In additional to having natural soul and achieving much success as a hard bop player, his lyricism combined with the rhythmic intent from his tune "The Sidewinder" became a commercial success and a stylistic formula to emulate: the "boogaloo" style.  Like Clifford Brown, he too played with bandleader Art Blakey, later replaced by Freddie Hubbard.  Lee Morgan is known by many for playing with John Coltrane as a sideman on the famous album Blue Train.

Freddie Hubbard (1938-2008) shares the top spot on my list with Miles Davis.  No one played the trumpet harder, faster, or with better chops in all of jazz history than Freddie. One cannot place either trumpet master higher than the other on this list, for they are each the best in different ways.  Freddie Hubbard had an incredible amount of soul, a very thick library of music, and was at the absolute forefront of hard bop for longer than anyone else.  He honed his style and eventually was regarded as having created "soul jazz."  I composed a song in memory of Freddie Hubbard immediately following his passing in 2008, recorded it, and released live-action music video of it in his honor (viewable via YouTube.)  I titled my composition, "Dear Freddie," following the same naming convention Freddie Hubbard used for his composition, "Dear John," which he based on John Coltrane's "Giant Steps."

Miles Dewey Davis III (1926-1991) shares the top spot on my list with Freddie Hubbard.  Similar to comparing the best apple on Earth to the best orange on Earth to decide the best fruit, I call both Miles and Freddie the best jazz trumpeters, yet they are totally different players.  Miles Davis is the father of not one, but four, jazz idioms: cool jazz, hard bop, modal jazz, and jazz fusion.  I wrote an extensive article on that developmental process, which you may read here at Jazz Piano Universe.  Miles is such an important figure in American music that he stands as the only member of this list to have been inducted into the Rock and Roll Hall of Fame.  He recorded the best-selling jazz album of all time, Kind of Blue, which sold over 4 million copies in the United States and is still topping the sales charts today.  He has recorded with nearly all of my favorite jazz pianists.  Miles Davis is as prolific as Freddie Hubbard, albeit better-known worldwide.  It was extremely difficult to pick a track to listen to -- and to pick under 100 albums to recommend -- so, please enjoy!

Posted by Unknown at 8:23 PM No comments: